In 2012, English footballer Andre Gray tweeted ‘Is it me or are there gays everywhere? #Burn #Die #Makesmesick”.’

Following Gray’s winning goal against Liverpool yesterday, the striker ran for cover as his vile spew was discovered and re-tweeted. Gray said , ‘I want to offer a sincere and unreserved apology to anybody I may have offended in relation to these tweets.’ His statement went on to assert that he is ‘a completely different person’ now, and that any suggestion that gay people should die or burn was amongst his ‘big mistakes’: he is ‘absolutely not homophobic.’

Gray’s club and fans rallied to his support. In a brief statement Burnley FC minimized the remarks as ‘historical social media posts’ and, while condoning Gray’s ‘apology’, said the club ‘”do[es] not condone any discriminatory behaviour by any employee’. The cowardly evasion did not even appear on the club’s own homepage. And why should it? Gray apologized; he is a whole new person; he is not homophobic.

But none of this is credible, and the stinking words cling like a shitty diaper to Gray, to Burnley, and to the whole Premier League.

First, the ‘apology’ was obviously not written by Gray. The lawyerly tropes, ‘sincere and unreserved’ and ‘in relation to these tweets’ are not items in any linguistic register in which Gray speaks. The statement is a shallow and phoney lawyer’s production.

Second, suggesting that gay people should burn (or be burned?), die (or be put to death?) is not something that ‘may have offended’ people. To imply that mere offense is at issue here regurgitates the hatred. Admittedly, Gray’s words are not what English law regards as incitement to murder, but they fall squarely within what is, in many jurisdictions, criminal hate speech.  And even where the law tolerates such filth, sane people can see it for what is: a symptom of a dangerously disordered outlook.

Third, there was no psychological rift between 2012 and 2016 that could warrant Gray disowning his words as those of ‘a completely different person’, and no moral rift that could warrant Burnley dismissing them as a ‘historical’ evil. Gray is the person now that he was four years ago, and in 2012 anyone who was not a monster would know that gay people do not deserve to burn or die. Moreover, Gray’s views about sex and gender still remain on flamboyantly ignorant display in April 2015, as we see in his pathetic comment about Joseline Hernandez’ pregnancy: 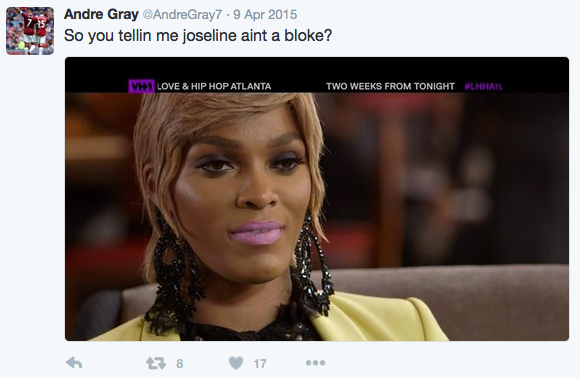 Fourth, Gray’s assertion that he ‘can only apologise and ask forgiveness’ is absurd. The club is paying him £6 million for three years’ work. If Gray were to return, say, 1/36th of that in compensation for his wrongful conduct, it would only be £167,000. Four weeks of service to those he said should burn or die. So it isn’t true that he can only apologize: he could do more if only he wanted to. Who to compensate? One appropriate recipient would be Sport Allies, who work to eradicate homophobia in UK sport.

Should we, as some suggest, think that Gray’s early life—in poverty, gang-culture, and racism—mitigates his wrongdoing, that it frees him of the responsibilities of any other human being?   No. In this case, the experience of oppression is not a mitigating factor but an aggravating one. Gray of all players should be able to identify the wrong he has done. He is well-placed to know just what it is like to be always at the sharp end of the stick. He would understand the menace in this:

“Is it me or are there blacks everywhere? #Burn #Die #MakeMeSick”.

Gray would never accept a mere apology for ‘any offense’ caused by those words. Neither should we accept his apology–and  neither should Burnley or the Premier League.

3 thoughts on “I apologize for any offense #MakesMeSick”